Wilson, the first Adventist Church president to meet with a UN chief, noted that the church has long supported religious liberty and said it was willing to team up on initiatives that followed Christ’s ministry of helping people physically, mentally, socially, and spiritually.

Ganoune Diop, associate director of the Adventist world church’s public affairs and religious liberty department, said his department takes Jesus’ words of being the “salt of the earth” and the “light of the world” in Matt. 5:13, 14 seriously. 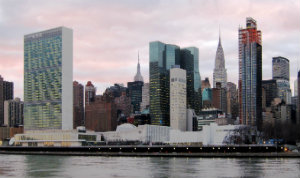 “Its representatives mingle with political and religious leaders in every country without losing or compromising a distinctive Adventist identity,” said Diop, who attended the meeting.

Ban met with Wilson, Diop, and John Graz, director of the public affairs and religious liberty department, at 12:10 p.m. Monday for a 45-minute meeting in his office at the United Nations headquarters in New York.

The meeting was arranged with the personal involvement of Ambassador Joseph Verner Reed, dean of the UN undersecretary-general and a friend of Seventh-day Adventists, who regularly corresponded with Diop to make the meeting a reality, Diop said.

“It was a real privilege to meet the secretary-general and to hear his appeal for assistance for humanity,” Wilson told the Adventist Review.

“Seventh-day Adventists should be ready to witness for the Lord anywhere we go and to testify of God’s blessing in our lives and what we can do in His name,” he said. “The world is waiting for this type of heaven-inspired testimony with clear answers to today’s problems.”

Ban spoke about global issues such as poverty and a lack of education before voicing his concern about religious intolerance reaching unprecedented levels globally. Just last week, a militant Islamist group killed 148 people in an attack on Christians at a Kenyan university. IS and other extremist organizations in Iraq, Syria, Nigeria, Libya, and elsewhere have also targeted Christians and other religious groups with often-deadly violence in recent months.

Ban underscored his belief that people should cultivate a respect for all, including those of other faiths. He indicated that he appreciated the Adventist Church’s work in promoting religious liberty as well as education, health, and humanitarian aid through the Adventist Development and Relief Agency. ADRA has worked with the UN in assisting refugees in the Middle East and elsewhere.

Wilson thanked Ban for the meeting and told about various church initiatives that correspond with the UN’s mission to help people. 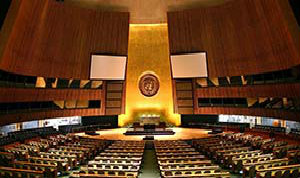 “We had an excellent meeting with the secretary-general and some of his staff, sharing with them about the Adventist Church’s activities,” Wilson said. “We focused on certain things that the Adventist Church can help with, such as religious liberty, freedom of conscience, ethical and spiritual values, respect for human dignity, family guidance, encouragement for young people, and basic human necessities like pure water and fundamental education.”

Wilson added: “It is only if we are led by the Lord that we can truly be effective in our outreach to the world preparing them for Christ’s soon coming by carrying out the practical ministry of Jesus through the Holy Spirit’s power.” 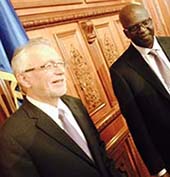 At the meeting with Wilson, Graz gave a short report about major congresses organized by the church-affiliated International Religious Liberty Association that promote religious liberty and the church’s strong support of Article 18 of the Universal Declaration of Human Rights, which says everyone has the right “to change his religion or belief.”

Graz, secretary-general of the International Religious Liberty Association, said he was encouraged to see Ban’s concern about religious intolerance and desire to see people of goodwill work together to bring justice and freedom.

“It was a historical meeting between the UN secretary-general and the president of the Seventh-day Adventist Church about the state of the world and how we can help people living in very difficult environments,” Graz said.

“As disciples of Jesus, we want to help people and especially those who are voiceless, discriminated against, and persecuted,” he said. “In this way, we share the essential values of the UN.”

Diop said he also saw ways that the church and UN could cooperate, particularly in eradicating poverty and promoting education and healthcare.

“The impressive portfolio that the Seventh-day Adventist Church has developed for the service to the whole human family remarkably resonates with the Millennium Development Goals and the Sustainable Development Goals of the UN,” he said in a statement.

By: A. McChesney, CD EUDNews.