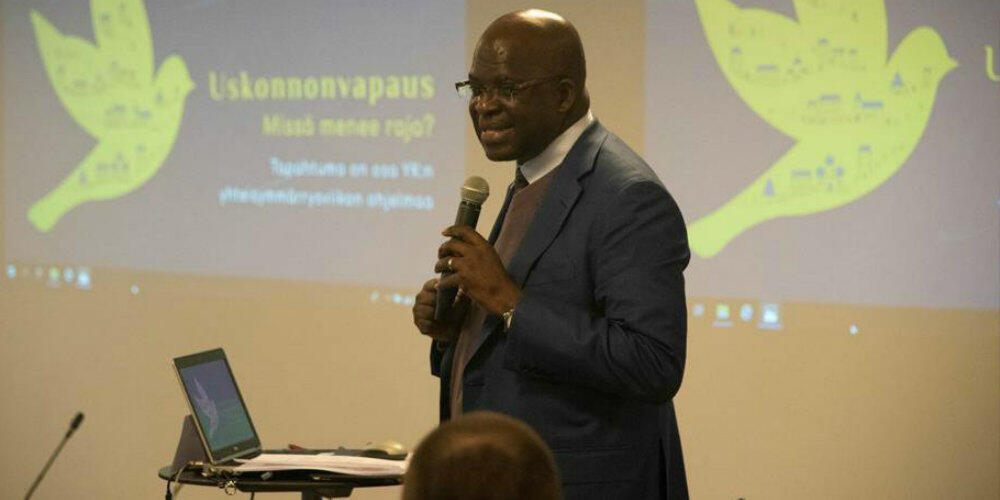 By: Pekka Kärkkäinen, and Adventist Review

Ganoune Diop, director of Public Affairs and Religious Liberty for the Seventh-day Adventist Church, presented the opening session of a seminar on religious freedom that took place in Finland’s Library of Parliament on February 6, 2019.

The seminar was organized by the Free Church Council of Finland (SVKN), together with most of the established religious entities of the country. No religious or non-religious bodies were excluded from participation.

About 80 people listened as Diop dealt with the issue of freedom of religion as an inalienable human right. “Freedom of religion is not only a legal right but is fundamentally connected with the idea of humanity,” he said. “It is a global principle that defines what it means to be human.”

Freedom of religion, Diop noted, is about freedom of conscience, freedom of speech, the right to gather together, and the freedom to make decisions. “It is equally an antidote to human exploitation,” he said.

Diop was one of three guest speakers and eight members of parliament who were invited. The former president of Finland, Tarja Halonen, also participated in the event, which was part of the United Nations’ Week of Mutual Understanding. The event was opened and concluded by Kalervo Aromäki, president of the Seventh-day Adventist Church in Finland.

Guest presenter Elina Vuola, from the University of Helsinki, dealt with the issue of the importance of understanding religions. She noted how important religious values are outside of Western Europe. “More attention is now paid to religions and their values in international relations,” she said. Vuola also warned against the danger of generalizing a religion and its practitioners based on a single crime committed by a member of that religion.

In the final speech, University of Helsinki professor Tuula Sakaranaho spoke about the principles of freedom of religion or belief, not just as an individual freedom but also within the whole context of society. “Often freedom of religion, the right to exercise faith, may be perceived by someone else as negative freedom of religion, a restriction of rights,” she said. “Society cannot legislate to control thinking, nor can religions be discriminated against.”

The seminar concluded with a panel of seven Finnish members of parliament answering questions about the topic. Their views varied considerably in an effort to balance rights between the individual and society, although everyone was ready to support the principle of freedom of religion as a human right.

In addition to presenting at the seminar, Diop and Aromäki visited the Evangelical Lutheran Church’s Office of the Church Council. They met church representatives and shared their thought that Adventists and Lutherans must continue to have dialogue on this crucial topic after the door has been opened for it.

Aromäki was the one who first introduced the idea for the religious liberty symposium, while he was attending an SVKN meeting. “One of the benefits for smaller denominations in Finland could be that they will be recognized as a viable voice on important human matters,” he said. “And this seminar is a positive proof that it can happen.”

This story appeared in Adventist Review. The original version of this story was posted on the Trans-European Division news site.