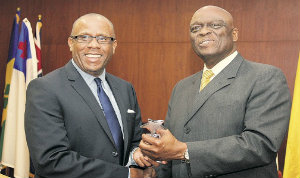 Nigel Coke (left), communication, public affairs and religious liberty director of the Seventh-day Adventist Church in Jamaica, accepts his award from Pastor Israel Leito, president of the Seventh-day Adventist Church in Inter-America, for his outstanding leadership in spearheading a successful Festival of Religious Freedom in Jamaica. The presentation was made at a religious liberty congress at the Four Points Sheraton Hotel in Medellin, Colombia, last month.

TEN years after he left his banking job in Kingston and moved to Mandeville to run his church's fledgling communication department, Nigel Coke has been honoured by Miami-based Inter-American Division of Seventh-day Adventists (IAD) for religious liberty work.

Coke, who has lifted church communication work in Jamaica and the Caribbean to new levels, is now in the line of sight of the Inter-American Division Adventists (IAD), though he deflects such suggestions as speculation that he has no time for.

"My life is the Lord's and I go wherever and whenever He commands. I get great satisfaction from my work here. Our Jamaican Union Conference has grown tremendously and there is so much more to do. Where He leads me I will follow," said Coke, who went to Medellin, Colombia, recently to receive his award for outstanding work in promoting religious liberty over the past five years, at the Inter-American Division's Second Religious Liberty Congress.

The Jamaica Union Conference of Seventh-day Adventists (JAMU) was recognised as one of the International Religious Liberty Chapters that has done an outstanding job in promoting religious liberty over the past five years.

Pastor Roberto Herrera, public affairs and religious liberty director of the IAD, said the Jamaica Union received the award because "we took into consideration the rallies that were done in all the conferences, the formation and launch of the National Religious Liberty Association (NRLA), and the good relation with the Government and the Church, and of course the Festival of Religious Freedom held in January this year."

Herrera said Coke was honoured for his leadership, which created the environment to make all those achievements possible, and that "he was also able to provide the platform where the media and other religious communities were integrated in the effort to promote and defend religious freedom for all in Jamaica". 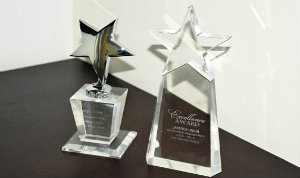 Commenting on the award, Pastor Brown said: "Mr Coke has given new life and meaning to the Religious Liberty Department of our Church, and today in Jamaica, the members of the Church and a broad cross section of the general public have become more aware of the value and significance of preserving our religious rights and freedom. He is a truly deserving recipient of the accolades and awards given to him by the Church."

In 2005, Coke walked away from a position as investment manager at FirstCaribbean International Securities Ltd, to be hailed five years later as the top communicator in the IAD by the Communication Department. He was then re-elected to serve as communication director in November 2010 and was given an additional department -- Public Affairs and Religious Liberty.

Jamaican Adventists in January this year hosted the Festival of Religious Freedom, the first in 20 years of the Adventist-backed International Religious Liberty Association (IRLA). At the end of the Festival, Coke was elected general secretary of a newly formed chapter of the association.

"Since our first festival almost 20 years ago, this one was among the greatest," said IRLA General Secretary John Graz of the Jamaica Festival. He pointed out that Dr Brown and Coke, whom he described as "the architect and the motor", spent "such an energy and creativity and kept smiling in spite of the stress he probably had to face. This great success is first your success, dear Nigel. But I know how you will react if you read this chronicle. You will say: To God be the glory!"

Asked by the Jamaica Observer for a comment on his award, Coke said: "It is a very humbling experience for me because we did not host the festival or form the NRLA for this kind of recognition. We did everything for Jamaica and its religious groups. The festival was done to educate and inform the public of the freedom of religion we enjoy and that it's not something we should take for granted, given that three-quarters of the world's population has little or no freedom at all."