Festival of Religious Freedom celebrated in the South Philippines

“It’s great to be free!” This is the sentiment of more than 3,500 advocates for religious freedom who came to celebrate the event, February 1, at Davao City’s CAP Convention Center. The Public Affairs and Religious Liberty (PARL) convention drew delegates and brethren from all over the island of Mindanao with guests from various fields. 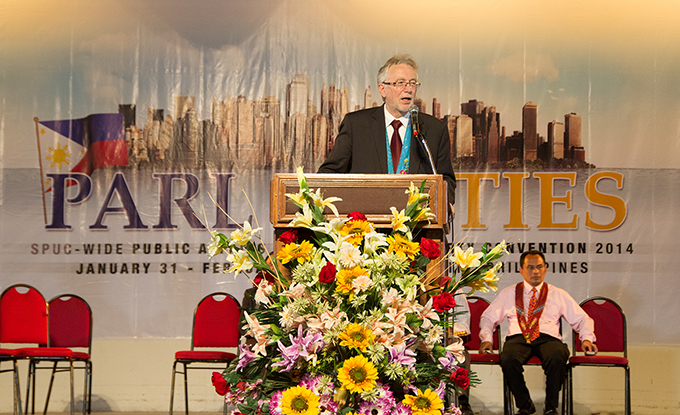 “Many thousands of Adventists in other parts of the globe would want to be here with us, but they cannot. You must be so privileged to have this freedom to come and worship God,” said Dr John Graz, director of Public Affairs and Religious Liberty of the Seventh-day Adventist World Church, as he opened his message at the Festival of Religious Freedom held in Davao City, Philippines, February 1. [Photo by Rhoen P Catolico]

World PARL director, Dr. John Graz, looked unfazed amidst reports of unrest elsewhere in Mindanao to grace the affair.  Graz spoke on the importance of religious freedom to accomplishing the church’s mission and the efforts being made to preserve it worldwide. Opening his message was a thought-provoking statement: “Many thousands of Adventists in other parts of the globe would want to be here with us, but they cannot. You must be so privileged to have this freedom to come and worship God.”

Giving their testimonies at the event were some dignitaries; they, being Adventists in public service: “It inspires me and helps me to be firm doing what is right in government service,” commented Atty. Dick Gungob, provincial prosecutor, Misamis Occidental.  “It makes me more prayerful to serve the people,” confessed Neneth Taroy, vice-mayor of the municipality of Gitagum in Misamis Oriental.

A night earlier, Friday, January 31, at Adam’s Center Church, Dr Jonathan C Catolico, PARL director for the Adventist Church in the southern Asia-Pacific Region (SSD), expounding on the Sabbath described that its observance is an expression of real freedom.  “We have this freedom, and we ought to benefit from it immensely. By doing so, we give glory to God, who is the author of freedom,” he stressed further. 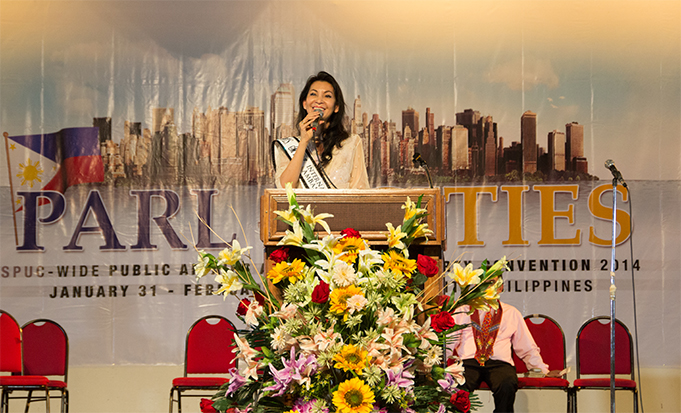 “Standing true to your principle will not dissuade you from doing right amidst hostile situations,” testified Ms Joyce Pilarsky, the reigning Ms Magnificent Woman Icon 2013-2014, as she spoke during the Festival. [Photo by Rhoen P Catolico]

Ms Joyce Pilarsky, the reigning Ms Magnificent Woman Icon 2013-2014, commented, ““I did not realize that on Sabbath, we have the highest share of our religious freedom by attending church worship services.” Ms Pilarsky, a well-known socialite and an Adventist, came to Davao City to give testimony of how the Lord blessed her in pursuing her career and at the same time representing her country worldwide.

“Indeed, we haven’t realized the significance of this freedom until we learned to know that this commodity cannot be found in so many places around the world, for they do not enjoy as much as we do here in our country,” said Gemma Cabatingan of Prosperidad Church, in Agusan del Sur.

In the afternoon of February 1, with the same number of participants jam-packing the CAP Convention Center, a wide array of professionals along with members of all classes bore testimony of God’s providence and work in helping them keep as well as share their faith beyond the church’s walls.

Organized by the PARL Department of South Philippine Union Conference (SPUC) in coordination with Davao Mission leadership, the whole Sabbath affair became first Festival of Religious Freedom in the island of Mindanao. And it was a day of singing and inspiring stories and news from far and near, a celebration to praise God for our freedom and for our faith. 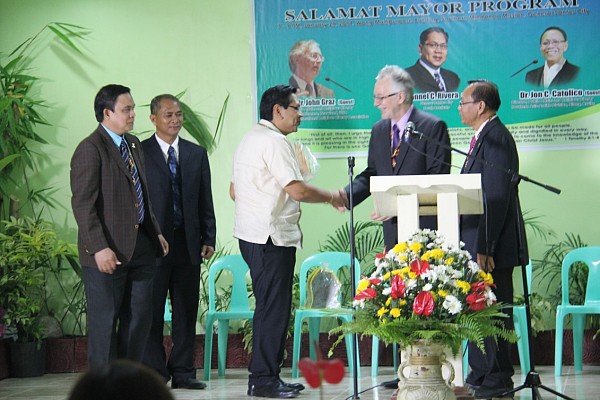 “I know that there lies more to do in this city to make it a better place to live in and this event inspires me to do much more,” said Mayor Ronnel C Rivera of General Santos City after receiving a Plaque of Appreciation during a Thanksgiving banquet held for him at the headquarters of the Church in Southern Mindanao. [Photo courtesy of Southern Mindanao Mission]

Prior to this Convention, three “Salamat Mayor” (Thank You Mayor) events were held in three cities: Panabo City, in Northern Davao; Koronadal City in South Cotabato; General Santos City, a chartered city in Southern Mindanao.  This event is a way the Church recognizes local executives for governance that contributes to free expression of everyone’s desire for good life, community cooperation and fellowship.  All three mayors responded that they were never feted to such Thanksgiving dinner during their public life more so by any church, except this one tendered by the Public Affairs of the Seventh-day Adventist Church. [Nelson V Paulo]