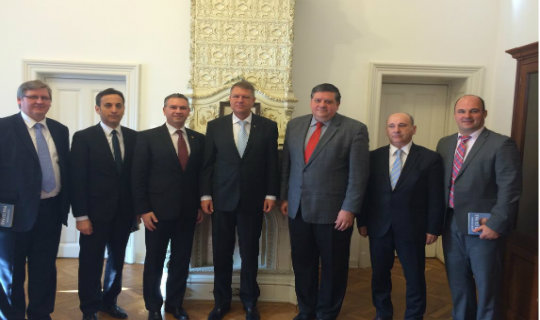 Although Romania is a majority-Orthodox country (86.5% of the population is Orthodox), it chose a Protestant president, Klaus Iohannis. It is the first time in Romania’s history when someone who does not share the religion of the majority is chosen to take an important position in the state.

"It was a great opportunity to meet Klaus Iohannis twice in the last two weeks and to discuss with him more than 40 minutes about PARL philosophy”, said Nelu Burcea.  “The first time, I met him during his election campaign on November 4th and second, on November 19th three days after his election victory at Romanian Parliament House.”

“These meetings,” Burcea went on to say, “have been very important if we consider that religious liberty issues in Romania still exist, and that some “pre-Decembrist” mentalities still exist. This is according to the survey “Religion and Religious Behavior” carried out by the Soros Foundation in 2011, which says that 39% of Romanians do not wish to have “sectarian” neighbors or people from a different religion. Various times a discriminative attitude was highlighted based on religious affiliation. In its public addresses, the Romanian Orthodox Church also suggested that being Romanian is synonymous with being Orthodox and that abandoning Orthodoxy makes you less Romanian".