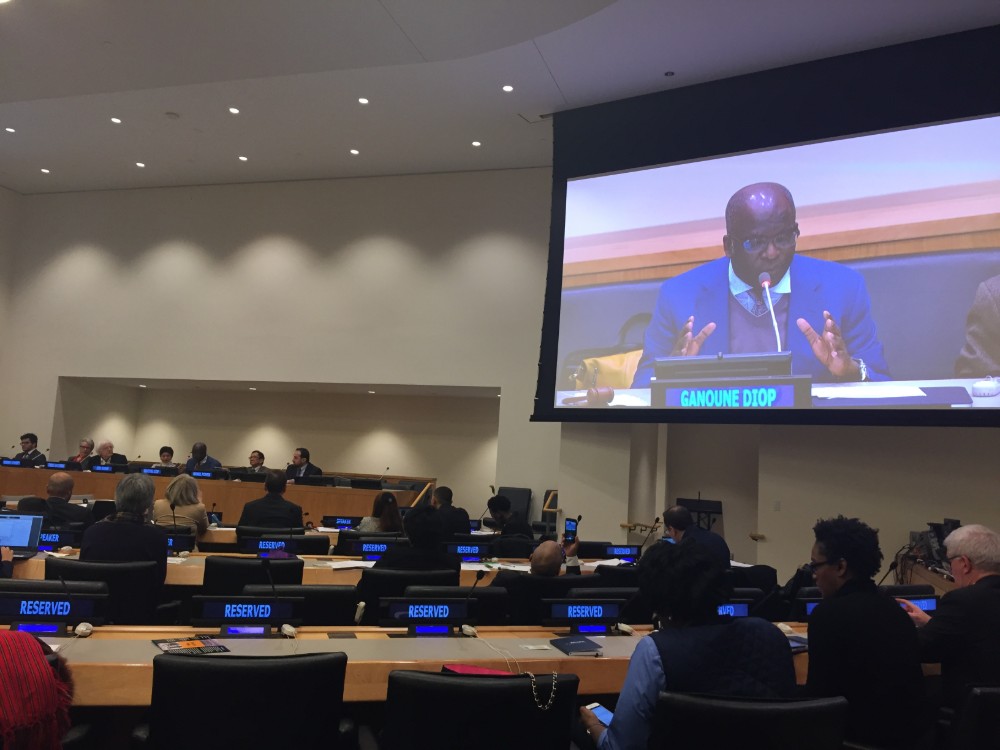 Faith groups bring more to the table than just dollars and cents when it comes to setting policy around humanitarian funding, according to organizers of a unique gathering at the United Nations aimed at amplifying the voice of religious groups at the international level. The fifth Annual Symposium on the Role of Faith-Based Organizations in International Affairs, held January 29 at the United Nations Secretariat in New York, was co-organized by the Seventh-day Adventist Church, and focused this year on practical and ethical issues surrounding development funding. More than 300 people attended, representing both the UN community and a diverse range of organizations, including Protestant, Catholic, Islamic and Jewish groups.

“Faith-based organizations are so important because you’re one of the principal platforms for the organization of the citizen and you provide the moral compass for our societies,” said His Excellency Lazarous Kapambwe, Permanent Representative of Zambia to the UN, one of the panelists in the morning session.

Speakers throughout the day echoed this key theme, emphasizing the important role religion and faith-based organizations can play as the UN pursues its far-reaching development agenda, known as the 2030 Sustainable Development Goals. These 17 goals, set by the UN in 2015 as its guiding objectives for the next 15 years, encompass a range of humanitarian challenges, from eradicating poverty and hunger to overcoming the scourge of illiteracy.

The Sustainable Development Goals are aimed at producing a “flourishing of human life,” said Dr Ganoune Diop, director of Public Affairs and Religious Liberty for the Adventist Church, and one of the founding organizers of the symposium series.

In his presentation during the first session of the day, Diop laid out a rationale for why religious organizations can and should be involved in the issue of sustainable development funding. “There is a clear and powerful theme woven throughout the Christian scriptures, and through many other religious texts, focused on justice and the protection of human life and dignity,” said Diop.

He traced the ideal of “justice” from the earliest written records of humanity through to the texts of major world religions, noting especially the writings of an 8th century Hebrew prophet recorded in the Judeo-Christian scriptures.

“The prophet Amos wrote on behalf of God the famous words that, in the twentieth century, were quoted time and again by Martin Luther King Jr.,” said Diop. “‘Let justice roll like a river and righteousness like an ever-flowing stream.”

Diop said the theme of the symposium—“Financing for Sustainable Development: Towards an Economy of Life—” reflects this idea of justice as a moral imperative.

“An ‘economy of life’ puts human life before corporations and profits and it invests in sustainable development,” said Diop. “It is about saving life and supporting an abundant life; it’s about creating conditions that will sustain a dignified life; and, it’s about fostering partnerships across many sectors of society to make life flourish for all.”

The event was the fifth in a series of annual symposiums co-organized by the Public Affairs and Religious Liberty department of the Adventist world church. Other organizers of this year’s symposium included the General Board of Church and Society of the United Methodist Church, the World Council of Churches, Islamic Relief USA, and ACT Alliance. The event was again cosponsored by the United Nations Inter-Agency Taskforce on Religion and Sustainable Development and the Rev. Douglas Leonard, representative to the UN from the World Council of Churches, played a pivotal role in coordinating this years’ gathering.

Throughout the day, many speakers reflected on the unique position religious organizations occupy within societies, with their strong grassroots involvement and authoritative moral voice. Anwar Khan, president of Islamic Relief USA, noted that “80 percent of the world’s population holds to a religious faith,” a statistic that highlights the need for faith-based organizations to be heard on the national and international levels and to work together for shared humanitarian goals.

Anwar, along with other speakers, said the role of faith-based organizations in supporting humanitarian development goes well beyond leveraging financial resources—although that, too, comprises a significant contribution. Other contributions religious organizations can make include motivating individuals to support development efforts, being networks for sharing local knowledge and expertise, and also speaking out against unethical conduct and wrongdoing, whether by governments or the private sector, which hampers development progress.

Other panels during the symposium addressed issues such as ways to integrate human rights into financing approaches and ways to ensure stronger ethical frameworks for public-private development partnerships.

According to Diop, this annual event at the United Nations has become an invaluable way for faith-based organizations to talk with each other and with UN officials about shared concerns and goals, and to strategize ways to work together more effectively.

“For us, as Seventh-day Adventists, it provides a tremendous opportunity to hear from others in the international community and also to share our unique perspective, informed by our biblical values and worldview,” said Diop. Previous symposiums have tackled issues such as religious extremism and violence, the migration and refugee crisis, and the role of religion in peace-building.