Adventists in Peru Shine a Spotlight on Religious Liberty 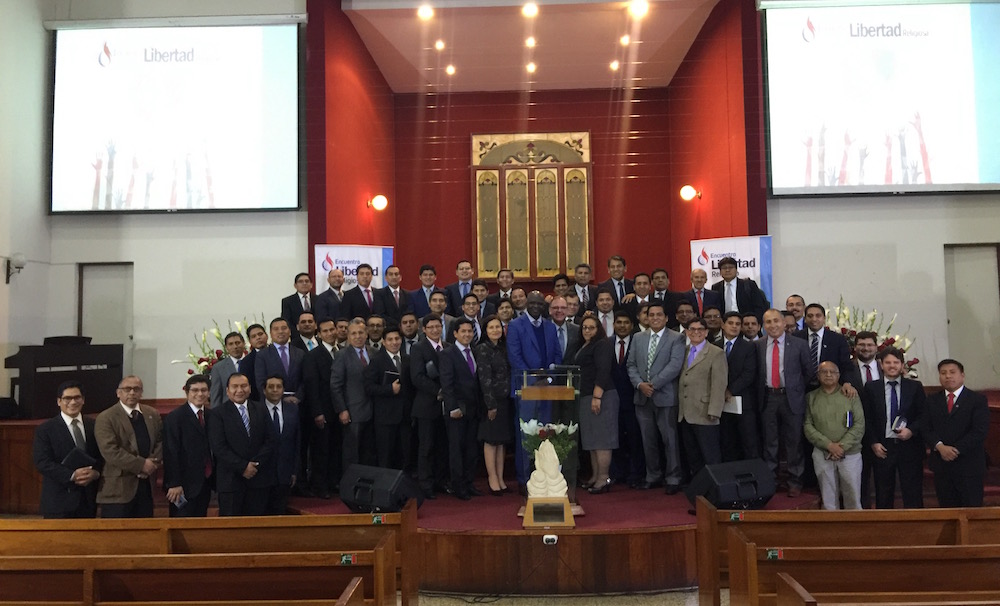 Years of quiet diplomacy and well-considered public advocacy by Seventh-day Adventist Church members in Peru have yielded significant religious freedom gains, according to Ganoune Diop, director of Public Affairs and Religious Liberty for the Adventist world church. Diop visited the country last month to take part in a four-day series of events, which included a Religious Liberty Conference, a training program for Adventist pastors, and visits with national government officials and leaders of other denominations.

“This ongoing commitment to engage with public leaders, and to educate Adventist laypeople and pastors about religious freedom issues, is helping position the church in Peru to a standing of relevance, trust, and credibility in the public realm,” said Diop. “This, in turn, supports the ability of the church to pursue its mission—which is the goal that drives the work of Public Affairs and Religious Liberty around the world.”

Prior to 2010, religious minorities in Peru did not enjoy the same level of legal protection or support as the country’s dominant religion. Almost a decade ago, Adventists began advocating for legislation that would bring equality between religious groups, and which would strengthen legal protection of religious freedom. In 2009, Adventists organized the country’s largest-ever religious freedom rally, bringing some 40,000 people together in the National Stadium of Lima. The event was attended by government ministers, the president of the Supreme Court, ambassadors, and other officials, as well as religious leaders representing Muslims, Jews, and Evangelicals. Before the rally, an estimated 10,000 church members walked through the streets of the capital, Lima, thanking the government for its protections of religious freedom, and raising awareness of continuing challenges.

Last months’ events in Peru took place October 24 to 27 and were organized by local Adventist leaders. Joining Diop on the visit was Pastor Helio Carnassale, Public Affairs and Religious Liberty director for the church in South America, and together they led a number of training seminars for pastors and laypeople.

They were also invited to visit Peru's National Congress, where Diop was honored by Congressman Juan Carlos Gonzales Ardiles, a noted human rights and religious freedom advocate. Congressman Gonzales Ardiles presented Diop with a plaque acknowledging his many years of work around the world promoting freedom of religion or belief.

Diop and Carnassale also met with administrators and faculty from Universidad Peruana Unión, the second-largest Adventist university in South America with more than 13,000 students. The school offers some 40 degree programs and, since 2012, has operated a school of medicine—the fifth medical school in the Adventist Church’s worldwide education system.

In their meeting, they discussed challenges which, according to Diop, are shared by religiously-affiliated educational institutions in many countries.

“When a student body is diverse—made up of students from many different religious traditions, or with no religious beliefs at all—the question often becomes: How can we maintain an Adventist environment that upholds core beliefs and values, but which doesn’t intrude on individual students’ own rights and freedoms?” Diop cited, for instance, questions such as enforcing chapel attendance, Sabbath observance, and expectations about standards of dress or behavior.

Diop said this can be a difficult balancing act for university administrators. “These are clearly very practical issues, but they should also be informed by an understanding of religious freedom principles. This includes the right of an institution to create and maintain a culture on campus that’s infused with a particular religious worldview. However, it’s equally important to acknowledge personal freedoms, such as the right to one’s own beliefs and the ability to act according to those beliefs.”

Engaging with questions such as these is a little-known, but vital, aspect of the work of Public Affairs and Religious Liberty within the Adventist world church, said Diop.

Babylon And Freedom Of Conscience Ending Violence Against Children on the Move For People of Faith, 70-year-old Human Rights Document Holds Special Meaning