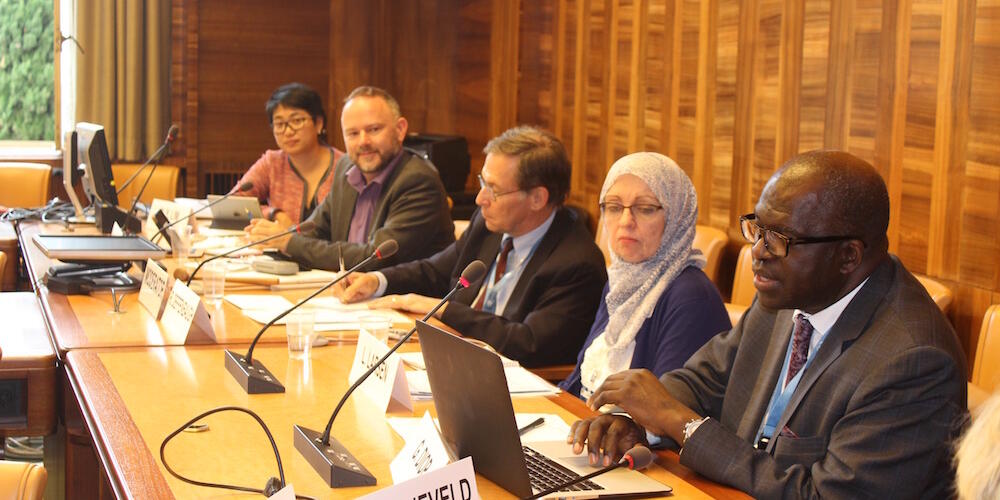 “Christians, first and foremost, locate human sexuality within the context of creation, where everything was declared ‘good,’ even ‘very good,’” Dr. Diop told the diverse group of attendees at the June 8-10 conference. “But, as the biblical narrative portrays, what the world has become after alienation from God is another story.” Photo: UN

Ganoune Diop, the top religious freedom advocate of the Seventh-day Adventist Church, spoke to a high-level United Nations conference about the various views of human sexuality in light of the Bible’s teachings and emphasized that the Christian imperative is to treat every human being with dignity and respect.

Diop, director of the church’s public affairs and religious liberty department and secretary-general of the International Religious Liberty Association, gave a keynote speech at the three-day event, titled “Freedom of Religion or Belief and Sexuality: A Conversation,” at the Palais des Nations in Geneva, Switzerland.

He explored the relationship between religious freedom, human rights, and sexuality after being invited by Heiner Bielefeldt, United Nations special rapporteur for freedom of religion and belief, to provide a scholarly overview of religious attitudes towards human sexuality, especially from the perspective of Christian traditions.

In his keynote address, Diop sought to explain the biblical teachings and values that inform a Christian response to same-sex relationships.

“Christians, first and foremost, locate human sexuality within the context of creation, where everything was declared ‘good,’ even ‘very good,’” Diop told the diverse group of attendees at the June 8-10 conference. “But, as the biblical narrative portrays, what the world has become after alienation from God is another story.”

Diop traced the historical evolution of various theological and traditional beliefs about human sexuality within various Christian communions, and the influence of cultural norms in shaping attitudes about appropriate sexual behavior.

Diop reviewed the seven biblical texts historically understood as prohibiting same-sex acts, and explained the divergent interpretations given to these texts. He said that the majority of Christians — whether Catholics, Orthodox, Protestant evangelicals, or Pentecostals — believe these texts to be a divine prohibition of same-sex acts. However, he also noted that a growing number of Christians challenge this reading, giving alternate interpretations that suggest, in their view, that the Bible does not address the issue of homosexuality as it is known today.

Diop also highlighted the widening chasm between secular society and religious organizations when it comes to issues of sexuality. He pointed to official statements by historic and mainstream Christian churches that endorse monogamous heterosexual marriages, which stand in stark contrast to the approach of civil secular society and a growing number of Christians who support homosexual marriage, lifestyle, and practice. Unanimity on this issue has become more and more elusive, he said.

Diop, an Adventist theologian and a former professor of theology, biblical languages, and comparative religions, also told attendees at the UN conference that “the very foundations of the Christian faith are based on the inalienable freedom of every individual to choose to enter a covenant relationship with God.”

This freedom, he said, means that Christians should be wary of trying to legislate their religious beliefs about sexuality, turning religious values into public policy that discriminates against or punishes those who reject specific religious teachings.

“In this debate, Christian churches and people of various religions or beliefs have to be clear about the real parameters of the debate,” Diop said. “The decision to legalize or criminalize belongs to the judicial courts and legislators.”

In an interview after the event, Diop pointed to Adventist Church cofounder Ellen White’s description of the relationship God seeks with His created beings in Patriarchs and Prophets, p. 34: “God desires from all His creatures the service of love — service that springs from an appreciation of His character. He takes no pleasure in a forced obedience; and to all He grants freedom of will, that they may render Him voluntary service.”

“Recognizing an individual’s freedom of choice in matters of sexuality does not equal endorsement, and it doesn’t dilute a Christian’s right to speak with moral clarity about God’s ideal for human relationships,” Diop said.

He said Christians have an additional responsibility based on the central Judeo-Christian belief that all human beings are created in God’s image. This responsibility, he said, is to recognize the stamp of the divine in every person and to extend to them the love and respect that Christ modeled in His relationships even with fallen humanity.

“What does that mean for Christians today when it comes to relating to those who have different beliefs about human sexuality?” Diop said. “It means saying ‘No’ to discrimination or any form of violence. It means demonstrating that people can believe differently, and be different, while sharing the same humanity; it means living in the common public space with respect for the dignity of every person; it means recognizing that each person has been granted the right — and responsibility—of freedom by their Creator.”

Diop continued: “No person should be denied his or her humanity, however they use their freedom of choice. God has given human beings the prerogative to live, or not to live, according to God’s revealed standards. Violence, hate crimes, or self-hatred induced crimes such as the horrific one the world witnessed recently in Orlando are totally repugnant and barbaric.”

In a second presentation to the conference, Diop reminded the participants that when talking about human sexuality, a broader category has to be taken into consideration. He suggested that the issue of sexuality should be intentionally expanded beyond LGBTIQ vocabulary to include discussion of a range of sexual practices — both legitimate and harmful—and also the difficult situation of individuals born with abnormal or malformed genitalia. He highlighted the issues of female genital mutilation, the abductions of boys and girls for prostitution, and the alpha male culture that significantly damages a healthy male self-image perception. He also reminded conference attendees of the historic practice of castration and sexual mutilations of male black slaves by Arab Muslims.

Why Speak at Conference?

Asked in an interview why the church participates in UN conferences such as this, Diop emphasized the immense value of having an Adventist presence and voice “at the table” within the international community of decision-makers: people of influence, who shape societal trends and values.

“Clearly, homosexuality and sexual identity are polarizing topics in many nations today,” Diop said. “Attitudes toward sexuality are tightly intertwined with culture, tradition, as well as religious beliefs.”

He noted that a broad spectrum of legal responses to same-sex relationships exist within the countries of the United Nations. These range from same-sex marriage and civil protections in the United States, South Africa, and several other countries, to prohibition, discrimination, and outright criminalization in others.

Yet despite the sensitivity and complexity of the topic, Diop believes that Adventists should not sit on the sidelines of the public discourse.

“Seventh-day Adventists are among the mainline churches that understand the divine order of creation to be the heterosexual union of one man and one woman in monogamous marriage,” Diop said. “That belief is thoughtfully articulated in the church’s official statements, and continues to be its considered position.

“As Mrs. White points out, ‘kings, governors, and councils’ are to have a knowledge of the truth through our testimony, for ‘this is the only way the testimony of light and truth can reach men of high authority,’” he said, citing a sermon by Ellen White titled “I Will Keep Thee From the Hour of Temptation” that was published in the Review and Herald on April 15, 1890.

“The public affairs and religious liberty department is focused on public engagement for mission,” Diop said. “Its goal is to position the church to a standing of credibility, relevance, and trust in the public realm without compromising the church’s values or teachings as expressed in official church statements. This is the goal that has animated the public affairs and religious liberty work of the church for more than a century, and this is still at the heart of our work today.”

Other presenters at the UN conference included Bielefeldt; Javaid Rehman, professor of Islamic law and international law at Brunel University, London; and Vitit Muntarbhorn, chair of the UN Commission of Inquiry on Syria and former UN special rapporteur on human rights in South Korea. On the third day of the conference, Diop and three of his co-presenters were invited to participate in a public panel discussion. This panel, which was intended for the broader UN community, was moderated by Kate Gilmore, United Nations deputy high commissioner for human rights.